I’ve a couple of stand fans for circulating air and cooling the rooms down but seems like the roomba 560 so not really like them.

The roomba 560 will climb onto the base of these stand fans and occasionally get stuck there, making that the last destination of its cleaning cycle.

So how can I avoid such situations? After some thoughts, I reckoned that I could:

Well, seems like the first three are either too expensive or challenging so I would go for option 4 instead!

I remember using some foam tapes or 0.5cm height to protect the bumper of my scooba 380, I could stick a couple of these on the surface of the fan base to make it higher and hence slightly more challenging for the roomba 560 to mount. The texture of the foam tape also increases the friction so that the roomba will not slide up the fan base, if it attempts to do so, the increased friction would activate the bump sensors, causing the roomba to back off.

After doing a couple of test, the $2 Daiso tape worked! The end results looks pretty cool too.

Great, now the roomba 560 completes it cleaning cycle without getting stuck! Time to explore how to build virtual lighthouse that works with my roomba 560 (without bluetooth)! 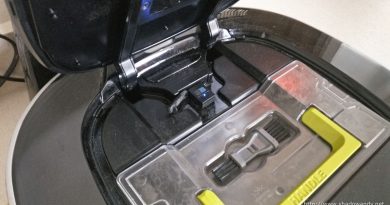